After further review: The Cowboys new guys made quite an impact against the Dolphins 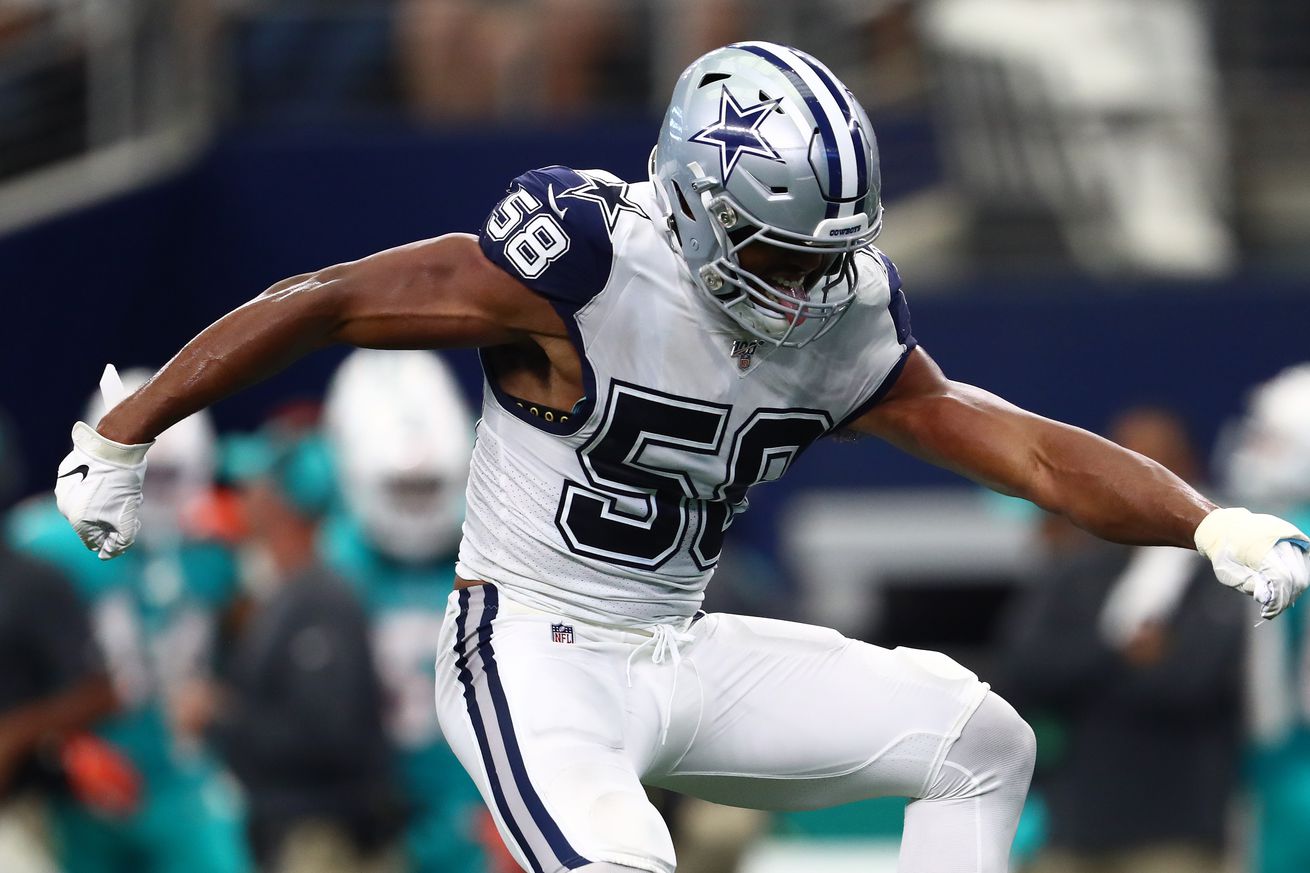 The new kids on the block had a good showing on Sunday for the Cowboys.

The Dallas Cowboys are off to a great start. There’s no denying that this team is stacked with talent, and they have several years of quality drafting to thank for that. But as great as the front office is on draft weekend, you also have to tip your cap to how the team has used other means of talent acquisition to build this roster. Between free agency and trades, the Cowboys are working the system well to bring in all kinds of contributors, and that was on full display on Sunday against the Miami Dolphins.

Several new players had a good performances, and it sure came in handy as the team was missing key starters due to injuries. After re-watching the tape, here are some things that stood out about these new additions.

The Cowboys got a $1 million rebate this year due to Quinn’s two-game suspension, but after watching him play on Sunday, it’s clear what they’ve been missing. Quinn was bending around the edge on a regular basis. He wasted no time letting his presence be felt. Josh Rosen did a great job of not lollygagging and getting rid of the ball quickly, and it’s a good thing he did. Quinn was so close to sacking him several times on Sunday but arrived just a tad bit late, or Rosen stepped up in the pocket and just out of harm’s way.

The veteran pass rusher was full of energy. He was chasing down players across the opposite side of the field, and despite coming so close many times, Quinn finally was able to get a sack in the second half. It was a nice debut for the team’s new right defensive end.

Robert Quinn was all over the place against his former team. If Josh Rosen holds the ball for half a second longer, Quinn ends up with five sacks on the day. pic.twitter.com/DbDEBRS3Wi

After the Cowboys lost Cole Beasley in free agency, it left a little bit of a sour taste because regardless of how you might feel about him now - he was a reliable target for Dak Prescott. Beasley cashed in on a nice deal from Buffalo, but the Cowboys didn’t panic. They signed former Green Bay Packers receiver Randall Cobb to a cap-friendly, one-year deal.

On the surface, it’s a great move for Dallas, but what will ultimately determine that is whether or not he can stay healthy. So far, so good, and evidence through three games shows a healthy Cobb is better than imagined. Through three games, he has a modest 11 catches for 116 yards, but it could be much higher if he wasn’t on the bad end of some penalties that nullified some big plays.

Cobb’s been earning praise ever since camp as news circulated about how he approached the game. And it shows in his play. He engages in blocks, he fights for extra yards, and he never quits on plays. It’s just great to have him as a part of this receiving group.

There is so much to love about what Randall Cobb brings to this offense. It's easy to see why the coaching staff is so high on him. pic.twitter.com/IfVwWsOGcu

When the Cowboys signed former Houston Texans defensive tackle Christian Covington, the team immediately got a boost in their depth at the 1-tech position. Last year’s surprise signing, Antwaun Woods, continues to play well, firmly cementing himself as the team’s starter at the nose, but Covington keeps the competition going. After losing Woods to a knee injury last week, Covington’s number was called this week against the Dolphins.

The veteran interior defensive linemen played on 58% of the snaps on Sunday, and he was very effective. He got good push in the middle and was disruptive in the trenches. It was a great showing of the “next man up” mantra.

Christian Covington was very effective filling in as the starting 1-tech. What a great free agent signing he was. pic.twitter.com/dEI294sUFW

Fans got a little taste of Tony Pollard while Ezekiel Elliott was chilling in Cabo during his holdout. He didn’t disappoint as he was very productive in the preseason. Once Zeke returned, Pollard seemed to vanish as he averaged less than two yards per carry on 13 attempts in the season opener against the New York Giants, and then only got four carries last week against the Washington Redskins.

But on Sunday, it all changed. Pollard teamed up with Zeke to run wild over Miami as both of them rushed for over 100 yards. Time and time again the Dolphins defenders stayed back in the secondary so Dak wouldn’t burn them (man, that sounds good to say), and the Cowboys countered with a heavy dose of the running game.

Credit the coaching staff for doing such a great job cycling in Zeke and Pollard to keep those legs fresh. And unlike Zeke’s backups in the past, the running game doesn’t seem to miss a beat when Elliott is not on the field. That’s just fantastic.

Tony Pollard is very Zeke-esque in many ways. The patience, the lunging for extra yards, and the ability to hit the hole with authority. I love this guy! pic.twitter.com/bMLUDo2csX

Five winners, five losers, and everything in between from the Cowboys win against the Miami Dolphins

Jerry Jones on Taco Charlton: When he didn’t get there, he just wilted