The 9 dumbest mistakes from a surprisingly good QB Week 3, ranked 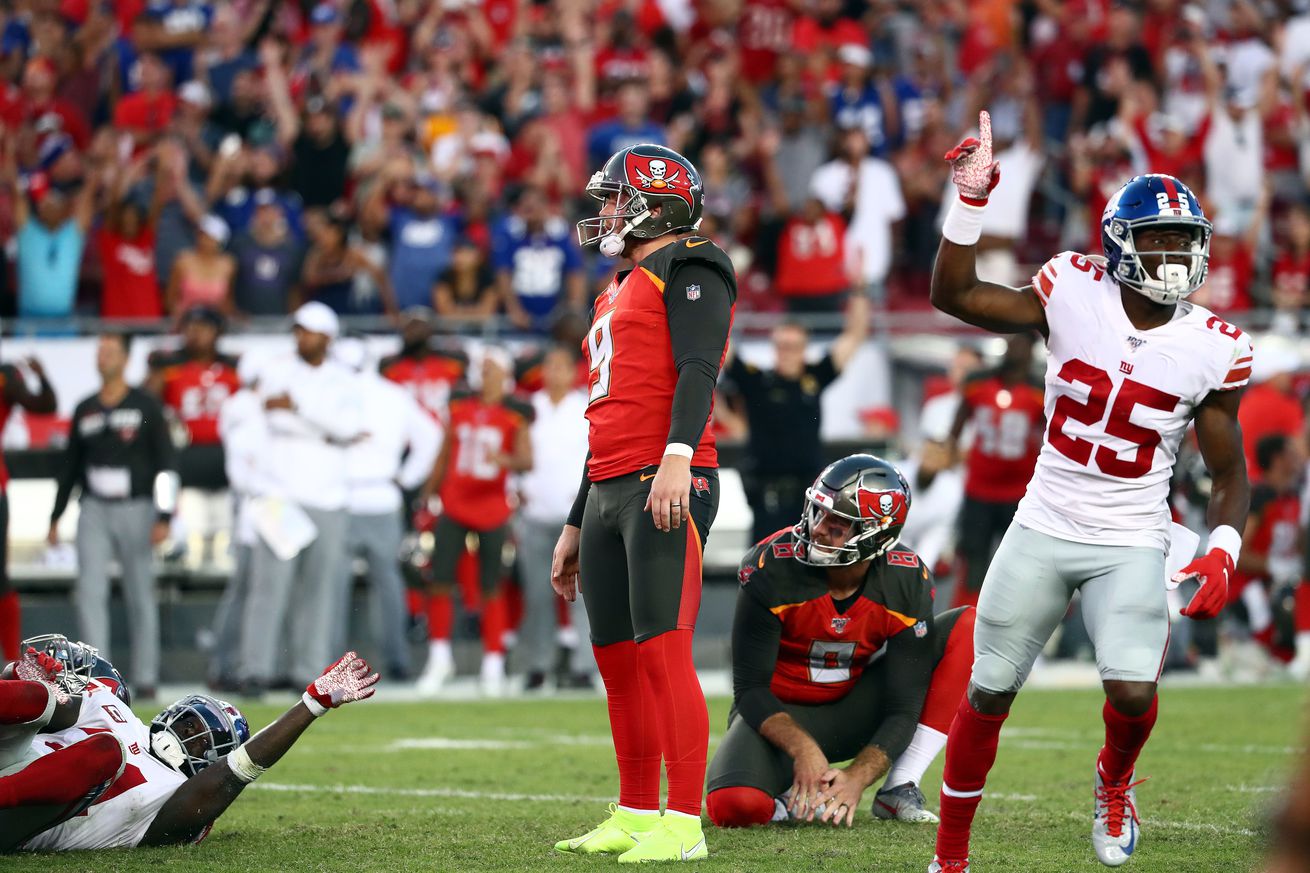 A lot of backups played this week, but it was the coaches who screwed up most, thanks to ill-advised draw plays and penalties taken (Bruce Arians) and timeouts not taken (Pete Carroll).

Week 3 in the NFL was all about the quarterback. That’s nothing new; almost every week in the NFL is about the quarterback. Yet on a day when Patrick Mahomes and Lamar Jackson were trying to out-video game each other, it wasn’t the already established stars who stole the spotlight. Instead, this Sunday belonged to guys who began the season riding the bench (or in the Jets’ case, on the practice squad).

Six quarterbacks made their first start of the season on Sunday, some due to injury and some due to crappy play from the former QB1s. That seemed like the perfect recipe for a disastrous afternoon of silly goofs we could poke a little fun at on Monday morning.

Then — the nerve! — they went out and performed admirably. As a group, the new starters went 3-3, and the ones who lost couldn’t be blamed for their team’s defeat. Some were even the reason their team won (take a bow, Daniel Jones and, ugh, Dave Gettleman we guess).

Fear not, though. Sunday still provided us with enough dumb mistakes to laugh about the next day. In fact, here are nine of them:

Deshaun Watson is a great quarterback. But even great quarterbacks do some very dumb things. Even though he got the win this week, Watson’s blunder was pretty up there, when he fumbled the ball against the Chargers. It wasn’t just that he fumbled, though. It was how he fumbled.

With Joey Bosa bearing down on him on a second-and-7 from Houston’s 39-yard line, Watson looked to Duke Johnson for a screen pass behind the line of scrimmage. But Johnson had Desmond King coming at him with a full head of steam and, not wanting to put his running back or himself in unnecessary danger, he threw it away.

Problem is, he threw it away behind the line of scrimmage — and backwards.

proof that even great quarterbacks can forget the rules of football pic.twitter.com/YUnkNJTew5

Yup, that’s always a fumble. This one was recovered and advanced by the Chargers, who took a 7-0 lead on the ensuing possession.

On one hand, Watson choosing to not take a sack AND to not put Johnson in line for a massive hit from King were good decisions. Too many quarterbacks dump the ball without looking at the position their potential receiver will be in once they’ve caught it. On the other hand, MAYBE throw it somewhere else next time.

8. Luke Falk threw a pass with a 0 percent success rate

The Jets still had a puncher’s chance in the third quarter of their game against the Patriots. Sure, they trailed 20-0, but Falk, making his first NFL start, still had the chance to instill hope in an otherwise miserable season in New York.

This did not happen. Instead, Falk treated the world to this image of Devin McCourty making an interception without a single Jet close enough to him to get picked up by CBS’ cameras:

Per NextGenStats, the nearest receiver was Robby Anderson ... who was 12 yards away. New England drove -2 yards on the ensuing drive and settled for a field goal to make it 23-0 in Foxborough.

7. The Patriots gave up their first touchdown in nearly 9 months in a very stupid way

New England played Super Bowl 53 and its first two games of 2019 without giving up a touchdown. That streak was still going strong late in the third quarter of Week 3 against the Jets ... until one muffed punt from an undrafted free agent gave Bill Belichick something to grumble about.

Gunner Olszewski’s botched return kept a 14-quarter TD-less streak from stretching to 15. Fortunately for the Patriots, they were still playing the Jets. New York added a fourth quarter touchdown when backup Jarrett Stidham threw a pick-six to Jamal Adams, but the New England defense failed to let an opposing offense into the end zone for the fourth straight game in a 30-14 victory. They’re the first team in the Super Bowl era to ever get through the first three weeks of the season without giving up a touchdown on defense.

6. The Broncos gave one of the league’s most dangerous passers a free play

There are two things Aaron Rodgers absolutely excels at: throwing deep bombs and taking advantage of a defense’s stupid mistakes. Green Bay’s first touchdown Sunday against the Broncos was a serendipitous combination of the two.

never, ever give Aaron Rodgers a free play pic.twitter.com/1DppKeAd8g

A hard count lured the Broncos offside, but Denver’s biggest issue on second-and-6 may have been leaving Marquez Valdes-Scantling in single coverage. The young wideout easily got inside leverage and sprinted downfield on a play where Rodgers’ short and intermediate routes were never an option. One easy pitch-and-catch later, the Packers led 6-0.

And once again, a defense had to learn the hard way to never give Rodgers a free play.

The Browns were always going to be a work-in-progress with a first-time head coach and sky-high expectations, but Freddie Kitchens is catching some heat for a decision he made on Sunday Night Football.

Trailing by four points with nine minutes to go, the Browns were facing a fourth-and-9 at the Rams’ 40-yard line. They left the offense on the field, and the Rams gave them a lot of space. Everyone got a little excited about what Kitchens could call in that situation. What creative thing would he do?!

this was Freddie Kitchens' 4th-and-9 play.

it was not very good pic.twitter.com/jzm3vbfeGr

Oh. He ran a sad draw play that went nowhere. Nick Chubb even looked like he wasn’t sure which way he was supposed to go. Despite having playmakers like Odell Beckham Jr. and Jarvis Landry, they went with that draw.

We get it — draws are relatively safe plays that teams run in long situations for their potential to catch a defense napping and convert the downs. But in the fourth quarter, against that Rams defense, you run a draw on FOURTH-AND-NINE, something no team has done in at least 12 years?!

At least Kitchens admitted (many times) after the 20-13 loss that it was a “bad call.”

Sometimes, you just gotta know when not to run it — and when to run it:

First and goal from the 4 with three timeouts.

No touches to Chubb.

No touches to OBJ.

4. The Eagles managed to blow it even more than the Lions

The Eagles were down three late, at home to the Lions. They had the ball at their own 22-yard line, facing fourth-and-8, and decide to go for it. Doug Pederson is notoriously ballsy with fourth downs, but they still had all three of their timeouts and the two-minute warning. And the play was a Carson Wentz scramble that came up a couple yards short.

That should’ve sealed the game for the Lions, but remember, their offensive coordinator is Darrell Bevell. They ran three plays, gained zero yards, and took 39 seconds off the clock. At the very least, they could get a field goal, right?

Nope, the Eagles blocked that and returned it to the Detroit 40-yard line, though a block in the back moved that back 10 yards. Facing another fourth down, the Eagles threw it and Wentz completed it for a first down, only to see that get wiped out with a pass interference penalty.

One play later, Wentz’s final pass fell incomplete and the Eagles — a Super Bowl contender coming into the season — had to leave their home turf with a loss to the same team that blew an 18-point lead against the Cardinals two weeks prior.

3. The referees didn’t flag a near-decapitation

The good news is Miles Sanders is OK after getting his helmet spun around 180 degrees and popped off his head:

The bad news is this somehow didn’t lead to a penalty. In a year where seemingly every play goes off under a microscope and ticky-tack fouls are called more often than any other time in the past decade, this actually dangerous play went off unchallenged by the officials.

2. The Seahawks wasted a huge play by DK Metcalf by sitting on timeouts

When Seattle started a drive on its own 21-yard line with 29 seconds to go, there were two ways to handle the situation:

The Seahawks went for neither strategy. The team threw a short pass into the middle of the field, but decided not to call timeout. That left only 10 seconds when the next play started and time in the half ran out when Russell Wilson found DK Metcalf for 54 yards.

this ludicrous play was ultimately meaningless because Pete Carroll left 2 timeouts in his pocket to end the first half pic.twitter.com/huR3QB8Q8n

If the Seahawks planned on throwing and trying to score, they absolutely should’ve used a timeout after first down. Instead, Seattle cost itself a 33-yard field goal attempt.

1. The Bucs took a delay of game penalty and missed a game-winning FG

Tampa had the ball left with 13 seconds to go against the New York Giants. The Bucs were in field goal range after Jameis Winston connected with Mike Evans for a terrific 44-yard pass play.

Video: Here’s Bruce Arians explaining that he took a delay of game penalty “on purpose” before final field goal to back up rookie Matt Gay, who had already missed one extra point and had another blocked in the same game. pic.twitter.com/h4WIwaVdq7

Yikes. Gay had already missed two extra point tries in a game the Bucs were trailing by one point. To the surprise of no one, his 34-yard potentially game-winning field goal sailed wide right as time expired.

Arians might be new to Tampa, but he should’ve known better. After all, the Bucs’ kicking game has been cursed for years.

Jerry Jones on Taco Charlton: When he didn’t get there, he just wilted